In HMR language quickstart tutorial we discus what components should every HMR+ model contain. These were: types, attributes, schemas and rules. We mentioned briefly that attributes and rules definitions allow to specify so called Callbacks and Actions, which are integration mechanisms. They allow to bind the HMR+ models with external data sources, or to provide a way of interaction with the user.

Go to HMR language quickstart tutorial and read the Use case scenario,a s we will refer to this scenario in this tutorial.

The model that represents the aforementioned scenario is presented in the figure below. 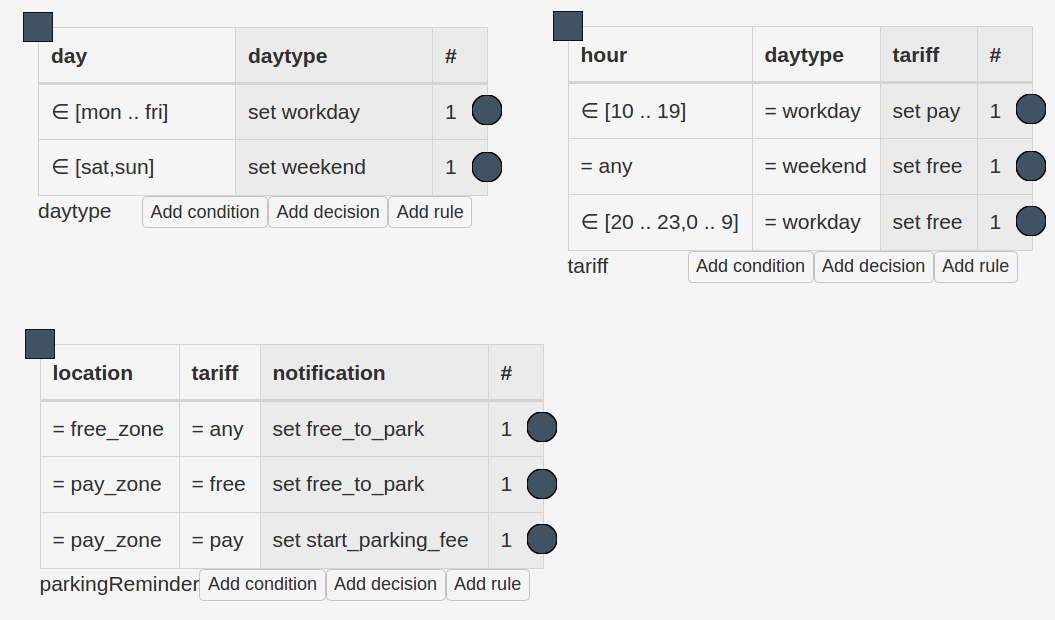 Note, that to perform reasoning, one have to provide several attributes' values such as value of: day, hour, and location.

The problem here is that the values for day, hour and location can be automatically obtained from the system, we should not provide these information by hand. These is what are the callbacks for.

You an download the model with callbacks created from here. However, we encourage you to follow the rest of the tutorial and try to build it on your own.

Additionally, the notification to the user about whether he or she should start paying for parking should also be somehow presented to him/her, as the Linux console (or Android LogCat) is not very user-friendly tool for regular users. This is where the actions comes for.

The example of the callback is presented in the listing below. It is a callback for obtaining system time (hour):

To bind this callback with an attribute hour from our model you can modify the HMR+ code of hour attribute definition, like in the following listing:

Alternatively, you can use HWEd editor to add the callback.

Callbacks are loaded during runtime, hence they need to be compiled before. Download the callback from previous section and compile it with following command (you will need to download the latest version of HeaRTDroid from here):

After that you can run the model just as we did previously, but now do not provide the hour as an initial state – it should be read automatically by callbacks system.

Try to do the same for the daytype attribute.

Actions are based on the same concept as Callbacks. There are several differences though:

To add an action to your rule, use the **> operator, like in the listing below: